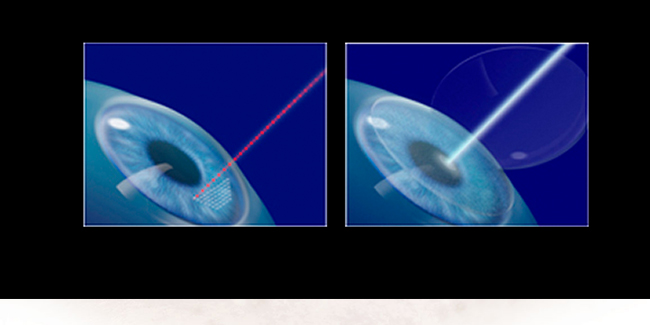 London Eye Centre offers patients two vision correction options. IntraLase SBK is an all-laser procedure eliminating the blade and cutting from the LASIK process. It offers comparable safety to the ‘No Touch’ PRK procedure as well as the shorter recovery associated with LASIK eye surgery.

The IntraLase femtosecond laser uses an infrared beam of light to precisely separate tissue by using focused laser pulses which divide material at the molecular level. This process allows the surgeon to produce an ultra-thin flap of corneal tissue, without the use of a blade (as in conventional LASIK). This flap is gently lifted to expose the underlying tissue followed by the surgeon reshaping the cornea with a second laser. It is a painless procedure that normally takes less than five minutes per eye. Patients who undergo the IntraLase procedure experience little to no discomfort following their surgery and normally see very well within 24 to 48 hours.

Combining the advantages of PRK and Lasik

LASIK
The LASIK (Laser-Assisted In Situ Keratomileusis) procedure involves the creation of a flap using a microkeratome blade, and the reshaping of the cornea using an excimer laser. First performed over three decades ago, it offers patients a relatively quick procedure and a fast recovery time.

PRK
Photorefractive Kerotectamy is a surface procedure which removes the epithelium skin cells rather than cutting a flap. The ‘No Touch’ PRK method is considered to be the most advanced version of surface treatment. Although recovery time is longer due to its less invasive nature, the ‘No Touch’ PRK is popular with patients who take a conservative, safety-first approach. The ‘No Touch’ PRK procedure can also treat many patients with high corrections who are not eligible for LASIK.

IntraLase SBK
IntraLase SBK (Sub-Bowman’s Keratomileusis) is a hybrid procedure offering the safety of PRK and the quicker recovery of LASIK. IntraLase SBK employs an infrared beam to make an ultra-thin, tailor-made flap superior in structure to a conventional LASIK flap. The computer-controlled laser creates and replaces the thinner flap with greater accuracy and precision. The IntraLase method gives your surgeon the ability to tailor the dimensions of the individualized corneal flap based on what is best for your eye.