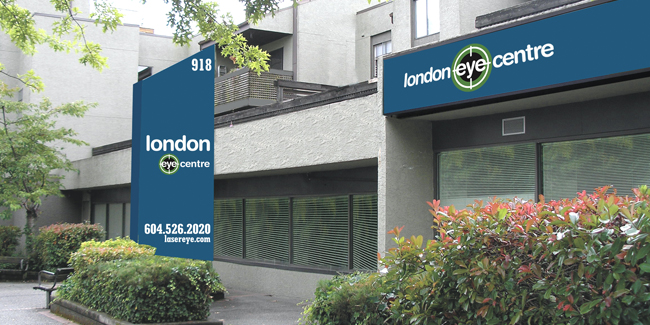 Experience What Sets Us Apart

First eye clinic in BC to be accredited

In 1985, London Place Eye Centre (as we were then known) opened its doors for the first time. One of the first private medical clinics in British Columbia, London Eye Centre originally offered cataract, refractive and cosmetic surgery to its patients. We were the first eye clinic in BC to be accredited by the College of Physicians and Surgeons: this is no small recognition. It means that we have been consistently found, through regular audits, to be adhering to a strict set of standards designed to ensure that patients receive the best medical care.

Our clinic has expanded three times, tripled the complement of staff and technicians, introduced many new surgical procedures to British Columbia and aided tens of thousands of people with their vision. Today, London Eye Centre focuses only on laser vision correction. The team of surgeons and technicians are dedicated to helping patients who want the best care for their vision problems, such as nearsightedness, farsightedness and astigmatism. London Eye Centre now has clinics in New Westminster and North Vancouver, BC. We have treated patients from all around the world, including all Canadian provinces and territories, 47 different US states and more than 30 countries overseas.

London Eye Centre's renowned surgical team, in conjunction with its Research Department, has been dedicated to improving and perfecting its brand of laser vision correction. The predictability, safety and computer control of the excimer laser has already proven its reliability. Worldwide, well over 10 million procedures have been performed and this number is rising continually each day. London Eye Centre surgeons alone perform an average of nearly 350 treatments each month. While advancing the science of laser vision correction, London Eye Centre has been able to speed up healing and visual recovery, minimize discomfort and improve predictability for patients with moderate and extreme corrections. Our 'No Touch' procedure has improved vision correction surgery to a level of safety and appeal that is highly attractive to the more cautious patient.

London Eye Centre has a distinguished history of advancing the science of laser vision correction.

1990
First clinic in British Columbia to use a surgical laser to correct nearsightedness and astigmatism with a procedure called Photorefractive Keratectomy (PRK). Dr. Johnson becomes the first Canadian investigator for the VISX Excimer Laser

1993
First clinic in British Columbia to develop a regional system of patient care, called Reciprocal Patient Care - over 1,400 eyecare professionals in Canada, the United States and many countries worldwide provide quality pre- and post-operative care for the Centre's patients; patients can have treatment at London Eye Centre, return home the next day and have their follow-up care with their doctor, knowing the progress will be closely monitored by the clinic's highly trained staff. First clinic in Canada to correct farsightedness with the Holmium laser

1994
First clinic in Canada to correct farsightedness with the Excimer laser; Adopted 'Open House' philosophy for eyecare professionals (the centre is open to optometrists and ophthalmologists who attend surgery and observe advanced surgical and medical techniques; provincial and state optometric associations have granted education credits for these visits)

1995
London Eye Centre plays host to hundreds in the refractive surgery industry from around the world at the first in a series of annual conferences held each year at Whistler, BC; the Pacific Coast Refractive Symposium featured the pre-eminent names in refractive surgery

1997
First clinic in the world to correct farsighted astigmatism Dr. Johnson receives a US patent and trademark for his invention and use of the 'No Touch' surgical technique

2003
Opens satellite facility in Kamloops, BC, for easier access to top technology for all BC residents

2007
London Eye Centre has now performed over 75,000 successful laser vision correction procedures, ranking them among the most experienced facilities in the world

2009
London Eye Centre offers the revolutionary All-Laser LASIK. With All-Laser LASIK, patients enjoy the safety and results of ‘No Touch’ PRK, along with rapid vision recovery and less discomfort all without the cutting/blades associated with LASIK