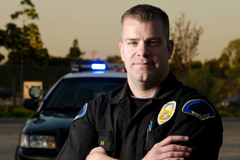 Imagine yourself in a situation where you were physically, mentally, and in every way fit to take on your dream job EXCEPT for one disqualifying flaw that wasn't even your fault. This had previously been the unfortunate story for countless potential recruits for law enforcement, fire fighting, and some military positions. They qualified in every way but one - their vision.

For these individuals their dream vocations have minimum vision requirements unaided by glasses or contacts. The reason for these requirements are valid and understandable. If someone requires correction to see properly but the corrective lenses were to be lost or damaged during a work-associated incident, the results could be disastrous. Before laser correction, only those with acceptable visual acuity without corrective lenses could apply. However, with the acceptance of laser correction as an approved solution by these agencies came an open door to a career path that previously was unavailable to many.

PRK (photorefractive keratectomy) is often the recommended procedure of choice for most recruits and is accepted by all law enforcement agencies. Intralase SBK may also be acceptable for some positions.  Conventional blade LASIK is less preferred due to the possibility of post-surgery flap complications.  It’s best for the recruit to check with his/her organization for their policy regarding vision and procedure requirements.

Laser vision correction doesn't just benefit the recruits themselves, but our society and communities as a whole, as almost nothing stands in the way of the brightest and best recruits taking up these important posts.