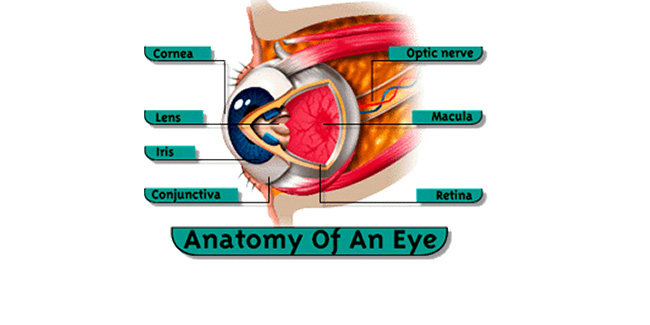 How The Eye Works

The human eye is the organ which gives us the sense of sight, allowing us to learn more about the surrounding world than any of the other five senses. We use our eyes in almost everything we do: reading, working, watching TV, writing a letter, driving a car, and countless other activities. Sight is the most precious of the five senses, and many people fear blindness more than any other disability. The eye allows us to see and interpret the shapes, colors, and dimensions of objects in the world by processing the light they reflect or give off. The eye is able to see in dim light or bright light, but it cannot see objects when light is absent. The eye changes light rays into electrical signals then sends them to the brain, which interprets these electrical signals as visual images. The eyeball is set in a protective cone-shaped cavity in the skull called the orbit or socket and measures approximately one inch in diameter. The orbit is surrounded by layers of soft, fatty tissue which protect the eye and enable it to turn easily. Six muscles regulate the motion of the eye. Among the more important parts of the human eye are the cornea, lens, iris, conjunctiva, retina, the macula, and the optic nerve.

The cornea is the dome shaped layer that lies in front of the colored part of the eye (iris) that resembles the crystal of a wrist watch. The cornea and the sclera (white part of the eye) form the outer wall of the eyeball. Because the cornea contains no blood vessels, it remains transparent allowing light rays to enter the eye. Due to its curved shape, incoming light gets refracted (bent) and is focused at the back of the eye. Combined with the lens, the curvature of the cornea determines how well the eye can focus on objects close-up and far away. Since the cornea does not replenish itself, it allows laser vision correction to permanently change the shape of the cornea providing long lasting result.

The lens is a tiny flexible structure, about the size of an aspirin tablet, located directly behind the iris. Like the cornea, the lens is transparent because it contains no blood vessels, and refracts light that enters the eye. The lens is surrounded by muscles of the ciliary body. These muscles make constant adjustments to the shape of the lens to produce sharp visual image as the eye shifts focus between nearby and distant objects. As we get older, the elasticity of the ciliary muscles weakens, diminishing the lens’ ability to focus vision on near objects. As a result, there is the need for reading glasses. This condition is known as presbyopia (see monovision). Another aging condition of the lens is known as a cataract. This is a clouding that develops in the lens which obstructs the passage of light. Cataract surgery is a replacement of the natural lens of the eye. Having laser vision correction of the cornea does not prevent patients from undergoing cataract surgery in the future if needed.

The iris is the colored disk that lies behind the cornea and is what people refer to when they speak of the color of their eyes. Melanin, a dark brownish-black substance inside the cornea, determines eye color. The more melanin there is and the closer it is to the surface of the tissue, the darker the color of the iris. For example, there is more melanin in brown eyes — and it lies closer to the tissue surface — than in blue eyes. In addition to giving the iris color, melanin absorbs strong or bright light that might otherwise be too overwhelming or cause blurred vision. Melanin is the same substance that gives skin and hair their color. People called albinos have little or no melanin and appear to have milky-white skin, white hair, and pinkish-gray irises. Quite often they have very poor vision and their eyes are extremely sensitive to light.

The conjunctiva is a membrane that lines the inside of the eyelids and extends over the front of the white part of the eye. It produces mucus, a clear viscous fluid that lubricates the eyeball, as well as some tears, which help keep the eye clean. Most tears, however, are produced by the lacrimal glands. The lacrimal gland lies at the upper outer corner of each orbit and spreads a smooth layer of mucus and tears over the eye each time a person blinks. After a person blinks, the fluid spreads evenly over the eye then flows into tiny canals in the lids. These canals lead to the lacrimal sac, a pouch at the lower inner corner of each orbit. From the lacrimal sac, the mucus and tears drain through a passage into the nose.

The retina makes up the innermost layer of the wall of the eyeball. It is only as strong as a wet piece of tissue paper. Light-sensitive cells in the retina absorb light rays and change them into electrical signals which are passed to the brain and interpreted as visual images. There are two types of these light-sensitive cells: rods and cones. The retina has about 120 million rods and about 6 million cones. Bits of pigment or colored material fill the rods and cones, and absorb even the minutest particles of light that strike the retina. The pigment in the rods is called rhodopsin or visual purple, and enables the eye to discern shades of gray and see in dim light. There are three types of pigment in the cones that enable the eye to see colors and to see sharp images in bright light. Cyanolabe absorbs blue light. Chlorabe absorbs green light. Erythrolabe absorbs red light. These pigments enable us to see and distinguish more than 200 colors.

Macula (part of the retina)

The macula is a round area that lies near the center of the retina. The macula consists primarily of cones and produces a sharp image of scenes at which the eyes are directly aimed, especially in bright light. The rest of the retina provides peripheral vision, which enables the eyes to see objects off to the side while looking straight ahead. Most of the rods lie in this part of the retina. Because rods are more sensitive in the dark than cones, faint objects can often be seen more clearly if the eyes are not aimed directly at them. For example, looking to the side of a dim star makes its image fall on the part of the retina that has the most rods and provides the best vision in dim light. In contrast, the cones in the macula often give a sharper image of an object in bright light if the eyes are aimed directly at it.

Optic Nerve (connects the retina to the brain)

The optic nerve is formed by rods and cones joined by nerve fibers at the center of the retina. This nerve consists of about a million fibers and serves as a flexible cable that connects the eyeball to the brain. The optic nerve carries the electrical signals produced in the retina to the brain, which interprets them as visual images. The point at which the optic nerve enters the eye is known as the blind spot. It has no rods or cones and as a consequence cannot respond to light. Normally, a person does not notice the blind spot because it covers such a small area and the eye makes so many rapid movements.